Left St Louis this morning, crossed the Mississippi River out of Missouri and into Illinois…and then had about five hours on the interstate headed north to Chicago – great to be back in one of my favourite cities.

It was hot again today, that Excessive Heat Warning still in effect, but after a stop for lunch at Cracker Barrel, we drove through a pretty big storm which, momentarily, dropped the temperature to something far more agreeable. Little did we know, but that was just the beginning of the weather… 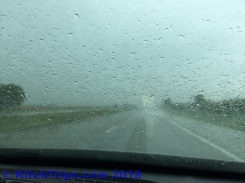 Arrived in Chicago mid-afternoon and drove along Lake Shore Drive north towards the Wrigleyville/Lakeview neighbourhoods. We’re staying in a very nice second-floor apartment about a mile from Wrigley Field and a very quick walk to the nearest train station for the elevated railway that could deliver us to downtown in a few minutes. Very handy location, and a very nice apartment, which is the first one I’ve ever stayed in where there’s a urinal in the bathroom. Interesting touch.

We are downtown for a couple days to go and see some Chicago Cubs baseball. There’s two baseball teams in this town, the Cubs and the White Sox, and if you like one, you generally don’t like the other. In fact, you hate the other team. I’m definitely a Sox fan through the influence of my friends out in the Wheaton area, but Wrigley Field is an iconic venue in sport, one that has thoroughly resisted the urge to modernise sports venues, and therefore doesn’t look all that much different to when it opened in 1914. Aside from, of course, the electronic video boards out in left and right fields.

The weather was supposed to be a little iffy before the game, and there was talk of a giant cell coming through right around when things should be winding up. Nevertheless, we walked up to Wrigley, got our tickets and went inside. Man, is it a tiny place. Much, much smaller than it looks on TV. As a buddy said to me when I mentioned the size of the place, Wrigley was designed in an era where people were tiny. It reminds me of parts of the SCG before the refurbishments happen, and I love how you’re basically sitting on top of the players. It’s 400 feet from the home plate to the centre field fence, but it seems half that distance.

The visiting team was the Mets out of New York City. They’re not great this year and the Cubs are pretty good, but we saw two good pitchers go at it, and it was a scoreless game through the first six innings, though not without plenty of drama. It was 1-1 at the end of nine regulation innings…and then the rain came, right on time, just after 10:00pm.

And it was a belter of a storm. Absolutely torrential rain. The kind where you’re absolutely saturated in about five minutes, regardless of the poncho you’re wearing, and where the streets are running like they’re rivers, gutters overflowing, everything full of water.

Needless to say, the game was postponed (and will be continued tomorrow) so we were basically kicked out of the ballpark. Trudged home in the rain and dark, got into the apartment, happy to be someplace dry and cool.