Take me out to the ball game.
Take me out with the crowd.
Buy me some peanuts and Cracker Jack.
I don’t care if I never get back.
Let me root, root, root for the home team.
If they don’t win it’s a shame.
For it’s one, two, three strikes, you’re out.
At the old ball game!

Much better weather overall today, but it was still looking pretty gloomy when we woke up, so we decided to watch the end of the delayed Cubs game from last night (it started at midday) and keep an eye on the weather. If the weather turned out okay, we’d head up for the start of the scheduled day game. If it stayed bad…well, we weren’t sitting needlessly in a ballpark. When you’re 15 minutes’ walk away, it’s easy to make such flexible plans.

The Cubs won the delayed game pretty quickly, despite some misty rain about, so we headed up for the afternoon game. Unfortunately, the Mets drove in four runs in the first inning – unfortunate because we missed seeing a Grand Slam! – and the Cubs really didn’t get back in the game. The Mets scored more runs in the seventh and ninth for a 10-3 win. 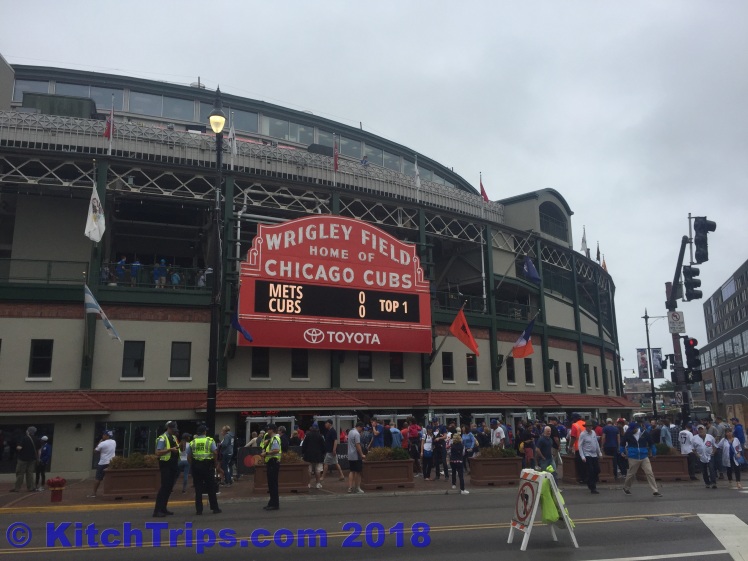 Later in the game, the sun sort of poked it’s head out and it turned into a pretty nice afternoon. Not quite the ‘blue skies with scattered fluffy clouds’ you see on all the postcard shots of Wrigley, but it was nice to see patches of blue and some sunshine after last night’s torrential downpour – we’re still drying our clothes after that!

I can’t believe I’ve been coming to Chicago almost yearly since 2009 yet this was the first time I ever visited the Friendly Confines. Not a Cubs fan by any stretch of the imagination, but it’s hard not to smile singing ‘Take Me Out To The Ballgame’ during the seventh inning stretch.

I was impressed by the atmosphere (the fans come late, but they pack the joint out every time and love their team like crazy) and the feel of the classic park, particularly how close you are to the action and now tiny the park seems, even though the famous ivy-covered wall is 400ft away, like most other ballparks. I guess, to give it an Australian comparison, you could make a case for saying it’s like the SCG with the Ladies and Members stands.

Back to the apartment this evening. Finished the book I was reading. Turned on the Sox game from Yankee Stadium and watched them win their first series in New York since 2005. Ordered some spectacular pasta via Uber Eats and I’m ready for a good night’s sleep before the start of a busy week out in Chicagoland’s western suburbs.