Two notes from yesterday that I forgot to add:

Back to today: great nine hour sleep. Caught up on my blogging over breakfast whilst Nathan continues to watch this bleak show on Netflix called Ozark which involves a guy moving his family from the idyllic Chicagoland neighbourhood of Naperville to the Missouri Ozarks after he gets involved in money laundering for a criminal element. Opening episode has all this guy’s friends getting executed and stuffed into crude oil barrels. An ironic show to be watching because we know people from the Naperville area and are currently in the state of Missouri. I prefer the levity of ‘Friends’.

Pretty quiet day. There was an Excessive Heat Warning for the St Louis area (stretching across the Mississippi into Southern Illinois) so being outside too much wasn’t the smart play. So we drove out to an outlet mall in Chesterfield, MO, about thirty minutes from downtown. They have pretty much every store you can imagine – amongst many dozens of others: Nike, Adidas, Sunglass Hut, Under Armour, Ugg Australia, Levi’s and Tommy Hilfiger – as well as a giant food court. For those who know DFO in Sydney, this place makes DFO look tiny.

Being an outlet store, the prices were unbelievably cheap, and I managed to get some Levis jeans amongst a few other things for less than a third of what I’d pay at home. Honestly, I don’t think I’ve bought jeans in Australia since I started coming over here way back in 2006. 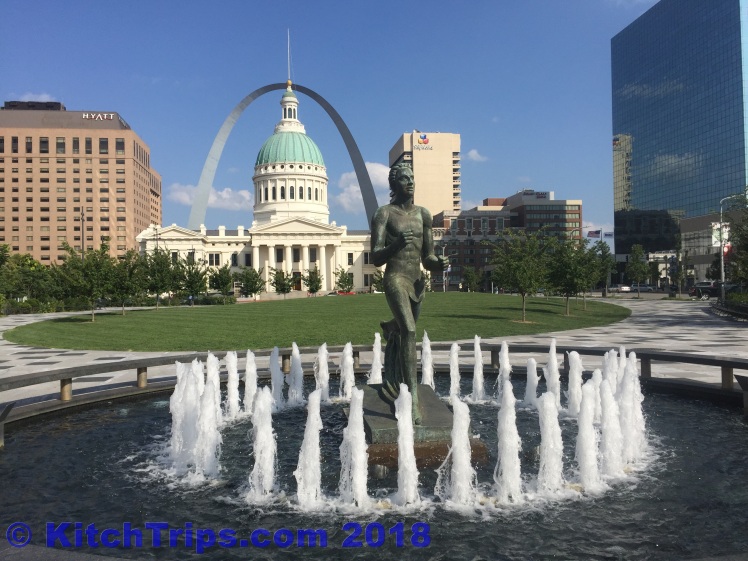 When we got back to the apartment, the temperature had dropped a little. Okay, it really hadn’t, but we went for a walk anyway, because you can’t come to St Louis and not see the Gateway Arch. It’d be like visiting Sydney and not seeing the Opera House or Harbour Bridge. When we were here three years ago on our way south, the entire area around the arch was being redone, so basically we were walking through a construction zone. Now, it’s amazing. Spectacular parkland, views of downtown and the Mississippi, and, of course, the mighty Arch, a symbol of American expansion westward. It’s quite an amazing thing to see.

Great Tex-Mex for dinner at Rosalita’s Cantina tonight – but the serve was probably the largest I’ve ever had and I could only get through about a third of it. So yeah, when even I can’t finish a meal, you know it was big!

What an amazing weekend in St Louis. One that I certainly won’t forget. Off to Chicago tomorrow!