Grew up in a town,
That is famous as a place of movie scenes
Noise is always loud
There are sirens all around
And the streets are mean
If I could make it here
I could make it anywhere
That’s what they say
Seeing my face in lights
Or my name in marquees found down on Broadway

Even if it ain’t all it seems
I got a pocketful of dreams
Baby, I’m from
New York, concrete jungle where dreams are made of
There’s nothing you can’t do
Now you’re in New York
These streets will make you feel brand new
Big lights will inspire you
Hear it for New York, New York, New York

My favourite city in America is Chicago, but New York City is a very, very close second, and I always hate leaving. So it was with mixed emotions that I woke up this morning. At least the weather had returned to it’s best: blue skies and sunshine. And plenty to do on our last day on the east coast. 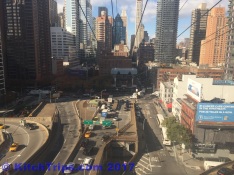 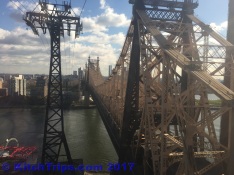 After a sleep-in that put us behind the ferocious New York City rush hour, we went into the city on the Ferry, and took a subway uptown to Lexington & 59th Street. From there, it’s only a few blocks’ walk to the Roosevelt Island Tramway. Now, unless you’ve seen the second Tobey Maguire Spider-Man movie, and you’re reading in Australia, you’re doubtless assuming we’re boarding something like what traverse the streets of Melbourne. 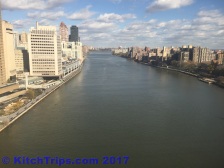 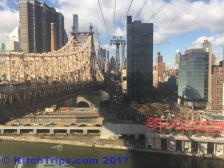 In New York City, a tramway is more like a gondola – and the Roosevelt Island Tramway resembles the Skyway up at Echo Point in Katoomba. The journey takes us above the streets of Manhattan, over the East River and drops us down on the island, a narrow skerrick of land sitting out in the middle of the vast river, with Brooklyn on one side and Manhattan on the other. 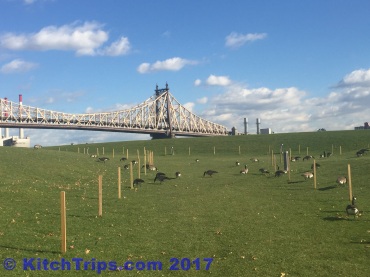 There’s lots of parkland on Roosevelt Island, as well as great views of the East River and United Nations building. We looped around the southern edge, disturbing a flock of loose-bowelled geese on the way – there was goose crap literally everywhere! – went back to the subway and journeyed back into sunny Manhattan, to the station serving 30 Rockefeller Plaza, right in the heart of midtown. 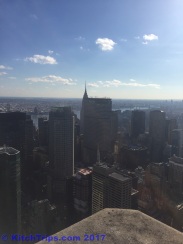 Dad, Nathan and I left mum sitting at a table near the famous ice rink and went to the Top of the Rock observation, which is spread over three storeys: the 67th, 69th and 70th. Not surprisingly considering both the height and it’s prime location, the views were fantastic, north across Central Park and south past the Empire State Building and out across the harbour to the Statue of Liberty and Ellis Island. 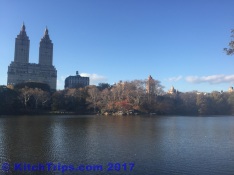 Added bonus – lines at Rockefeller Plaza are usually much shorter. It didn’t worry dad, Nathan and I on Monday. We had VIP upgrades, which allowed us to jump every queue on the way up and the way down. Sure, we got a few filthy looks from people who’d been standing in line for an hour or so, but we were in and out in half an hour, which was nice.

We collected mum, ate lunch and ventured into Central Park. I’m not lying, we walked literally half the park. They give you a map that’s folded in two, one half showing Central Park South and the other Central Park North. From the Park Plaza Hotel entrance, we walked paralleling Central Park West, around the lake, past the Boathouse, to Belvedere Castle, and back down paralleling Fifth Avenue to an Irish bar for a very well-deserved pre-dinner drink. It was such a beautiful afternoon to be out, so our tired feet were for a very good cause. 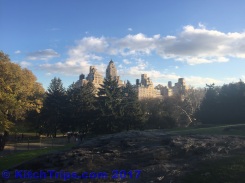 We met Erol for dinner tonight. He took us to Ted’s Montana Grill, owned by former media mogul Ted Turner. There, we ate the biggest onion rings I’ve ever seen – I regret not taking a photo because they were absolutely enormous! – and I polished off half a half roasted chicken with garlic mashed potato and carrots. I ate myself to a standstill. 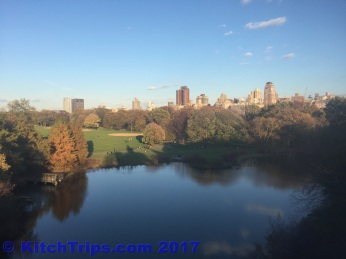 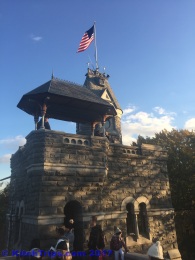 A really great day to close out a sensational weekend in the Big Apple. Early to bed tonight and up early tomorrow as we take our first steps westward. We’ll eventually go so far west we’ll end up in eastern Australia, but more immediately? Chicago for Thanksgiving. We’ll overnight in Youngstown, Ohio tomorrow.

Don’t stop being epic, New York City. Until next time…