Over there all the woman wear silk and satin to their knees
And children dear, the sweets, I hear, are growing on the trees
Gold comes rushing out the rivers straight into your hands
When you make your home in the American Land

There’s diamonds in the sidewalk the’s gutters lined in song
Dear I hear that beer flows through the faucets all night long
There’s treasure for the taking, for any hard working man
Who will make his home in the American Land

The days are winding down and whilst I’m looking forward to sleeping in my own bed again, leaving Chicago is never easy. Still, a couple more days and a few more people to see.

Another warm morning in Chicago. Went for a run and ended up getting a little lost on a path that I thought circled around a lake. Turns out, it didn’t, so I had to run alongside the road for a while as I tried to get my bearings. Just as well I took my phone. Google Maps is a lifesaver. Fun run, but warm. Nearly 6km and I was pretty exhausted at the end.

Went back to the Apple Store in Naperville after breakfast and dropped in my iPhone to have it’s battery changed. Stopped in at Starbucks for a coffee. Always amazed by the amount of people who set up camp in there, using the WiFi and drinking all sorts of different concoctions. It’s definitely a fun place for some people-watching.

For lunch, we drove north to Lincolnshire, about thirty minutes north of Wheaton/Naperville and met up with Mike and Sagar for lunch at Chipotle, a very tasty Mexican fast-food chain. I met Sagar for the first time last year at the Donahue wedding up in Michigan. Fun guy. And he got to enjoy the best of Australia – not Nathan or I, but a packet of Tim Tams. I suggested he keep them out of the fridge, Mike reckoned you needed to eat them from the fridge. Sagar came back later this evening after a taste test and is leaning towards keeping them out of the fridge. Of course he is. Only sane and proper way to eat them!

Good news on the iPhone: everything works as normal. New battery is in and no problems. Nice that it happened here in terms of the saving I made.

Had a great nap this afternoon before we headed over to Brian and Debbie’s for dinner. Rained on the way, the start of a pretty serious front that’s still lingering. Great to see two thirds of the Longhini clan, but we missed Will, who is out west in Seattle on work business. Debbie cooked teriyaki steak and chicken, with green beans and rice. Then there was apple pie and ice cream for dessert, all washed down with a cold beer or three. I could not have enjoyed it more if I’d tried. Just like the company, it was great. It’s always fun getting together with the first three Chicagoans I ever met, and Connor is a great addition. He loves his Sydney Swans doll! 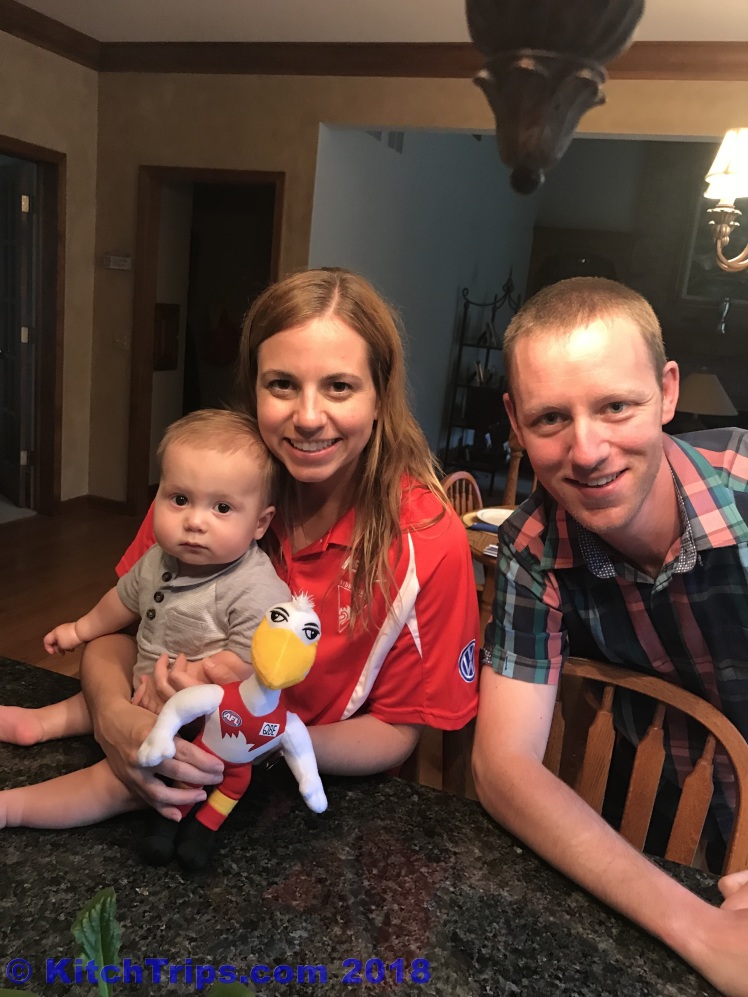 I’ve actually spent half the day thinking that today is our last day in Chicago and that the long journey home begins tomorrow, because for the last few years, we’ve always gone to Brian and Debbie’s on our last night. So it’s cool to realise that there’s still one day left here, even if the weather isn’t forecast to be that great. Thinking we’ll go and watch the new Mission: Impossible movie in the morning and we have Miles’ football scrimmage in the afternoon, before going to Arrowhead to watch the NFL kick-off game.

I think I’m going to leave this city exhausted.