They don’t get high in Colorado or party down in New Orleans
Ain’t no losers out in Vegas
Ain’t no Jack in Tennessee
I ain’t had me one too many, and if you believe that’s true
Oh, there ain’t no trucks in Texas, and I ain’t missing you.

Woke up after nine great hours of sleep. Actually, was woken up by a massive crash of thunder that announced the arrival of some pretty decent thunderstorms across St Louis. Rained most of the morning through to about 11:00am before things cleared over a little – enough that they could get the jet dryers going over at Gateway Motorsports Park.

Sad news here this morning the announcement that influential Senator John McCain is discontinuing treatment for brain cancer and is likely now in the final days of his life. Also, Ed King, guitarist for Lynyrd Skynyrd and the guy who wrote arguably their most iconic anthem ‘Sweet Home Alabama’ passed away, too.

Sad news back home with the continued leadership drama. A guy here whose name is Peter Dutton has been mistakenly getting a bunch of political Tweets at him over the last few days and by all accounts has become something of a minor celebrity back in Australia, and was apparently on all the morning shows.

Relaxing morning after nine great hours of sleep. Ate breakfast, posted a blog, did some indoor exercise, watched a few episodes of Friends on Netflix – that show really, truly holds up even after all these years – and headed over to the track. 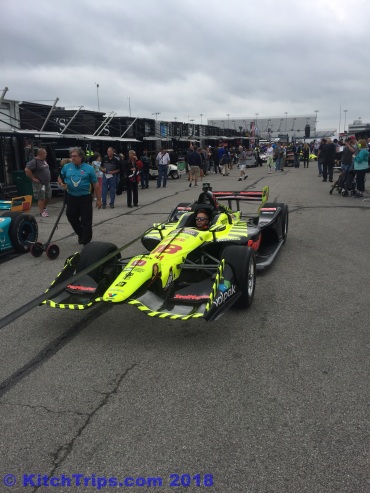 Although everyone calls this the “St Louis race” Gateway Motorsports Park is actually across the Mississippi River in Illinois. Literally, a 12-minute ride from downtown St Louis. It’s a flat 1.25-mile oval that’s shaped like an egg where turns 1 and 2 are narrower than turns 3 and 4. And the IndyCar Series is returning for the second consecutive year to race under the lights. Last year’s event – the first since 2003 at Gateway – was an unqualified success and watching it on TV made me want to come this year. So, here I am!

It was a mixed bag as far as on-track action went – some rain necessitated the re-drying of the track and cancelled qualifying for the IndyCar Series and also the Indy Lights feeder series. But during the rain delays, I put my paddock/pit pass to very good use (a bargain at $25!) roaming about the place, watching the crews work on their cars, watching broadcasters getting ready, watching the drivers do their thing. It’s a hive of very frantic activity, especially close to any given on-track session.

Being in Australia, most IndyCar races take place Monday morning, and for all the time I’ve had an iPhone, I’ve listened to the IndyCar Radio coverage of the race on the train on my way to work. So it was really cool to meet a couple of the commentators – Nick Yeoman and Jake Query – who’ve been the soundtrack to many Monday morning train rides to the city. In a way, it was like checking in with old friends. They were both really nice guys. I also ran into veteran Racer.com IndyCar reporter Robin Miller.

There were heaps of drivers around. The way they look after the fans, signing autographs, taking photos and talking, is something Australian sports stars could learn from. It’s very impressive how they go the extra mile to give fans a special experience. The fan engagement is second to none and IndyCar should be incredibly proud of the product they have, both on and off the track. 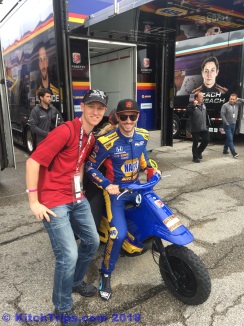 Late in the day, the rain cleared, the clouds drifted away and it was a beautiful evening. The IndyCar final practice ran for 90 minutes and then there was a stock car race to cap off the night. A great day (and a late one – we didn’t get home til midnight!) and looking forward to race day tomorrow!