We were “Jesus, save me”, blue jean baby
Born in the USA
Trailer park truck stop, faded little map dots
New York to LA
We were teenage dreamin’, front seat leanin’
Baby, come give me a kiss
Put me on the cover of the Rolling Stone
Uptown, down home American kids
Growin’ up in little pink houses
Makin’ out on living room couches
Blowin’ that smoke on a Saturday night
A little messed up, but we’re all alright.

I woke this morning to clear blue skies and sunshine – a perfect Adirondack day – but the temperature remained about four degrees below freezing. In the sun, though, it felt much warmer. 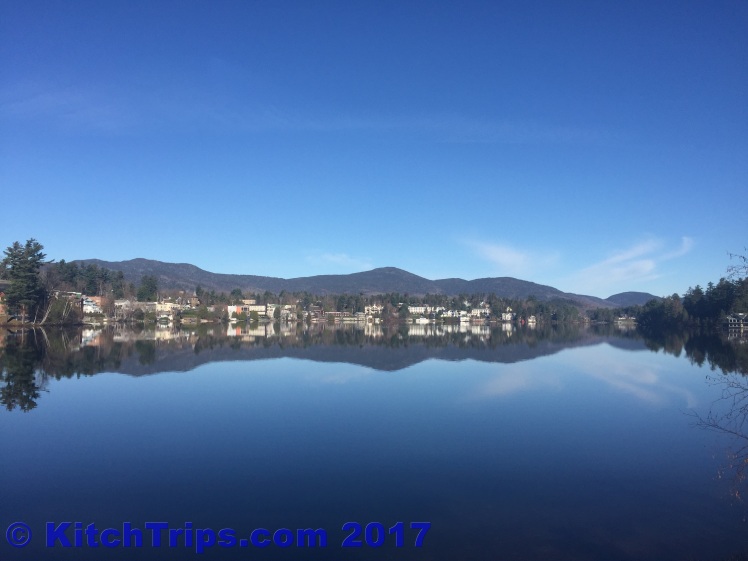 After breakfast, we drove around to the far side of Mirror Lake, parked at the trailhead for Cobble Hill and headed towards the summit. We’d been told that there were two ways to get to the top: the straight-up-the-hill path that was 0.8 miles in length, that required scrambling in places, or the 1.4-mile ascent that winds around Echo Pond before making it’s way to the top, through the snowy woods. It really was a postcard-perfect morning. 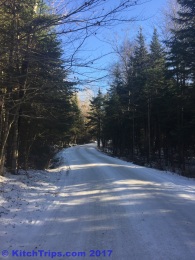 I’m glad that we chose the latter option – thanks for that, mum – because the trail, which was either snowy or icy or a dangerous combination of the two depending on where you chose to place your feet, was difficult enough as it was. If that was the easy trail, I didn’t want to see the hard one! 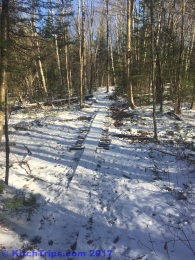 Thankfully, the views of the Adirondacks all around made the view worth it. Made the walk down worth it, too. That was a little fraught at times. The first part of the descent was a series of switchbacks. A combination of snow and ice with fairly steep terrain made it a pretty slow journey, but the main thing is that we all kept our feet and made it back to the car in one piece.

Our second stop was the Lake Placid Olympic Jumping Complex, where there are two ski jumps in operation – 90m and 120m – and you can buy tickets to the top of the bigger one, for amazing views…and to look down the jump and shake your head, certain that the people who ski jump for a living, hurtling down a long hill to soar through the air in basically only a Lycra jumpsuit, and willingly go do it again and again, are certifiably insane.

For those wondering, mum decided against making the 26-storey elevator ride to the top, because she doesn’t like heights, and it was a good decision because when you’re up there on the jump platform, wind blowing around, you realise what a long way up it really is. But the views are extraordinary: Lake Placid, Whiteface Mountain, the Olympic Sliding Centre, and more. We had perfect weather yet again. We’ve been so lucky.

Lunch, interestingly enough, was at a BBQ joint. I was pleasantly surprised by the quality of the hot dog and pulled pork I ate – upstate New York is, after all, a long way from the Deep South – and by the size. It filled me right up.

Another lazy afternoon back at the cosy apartment. Really enjoying staying here. I got my haircut, read my book, had a late-afternoon nap and a cold beer. Life really can’t get much better than this.

Downstate to the Big Apple tomorrow.