O beautiful for spacious skies,
For amber waves of grain,
For purple mountain majesties
Above the fruited plain!
America! America!
God shed His grace on thee
And crown thy good with brotherhood
From sea to shining sea!

A few years back, when I started encouraging mum and dad to come to America, I used Colorado Springs and specially Pikes Peak and Garden of the Gods, as a reason why they should visit. Today, we visited both. 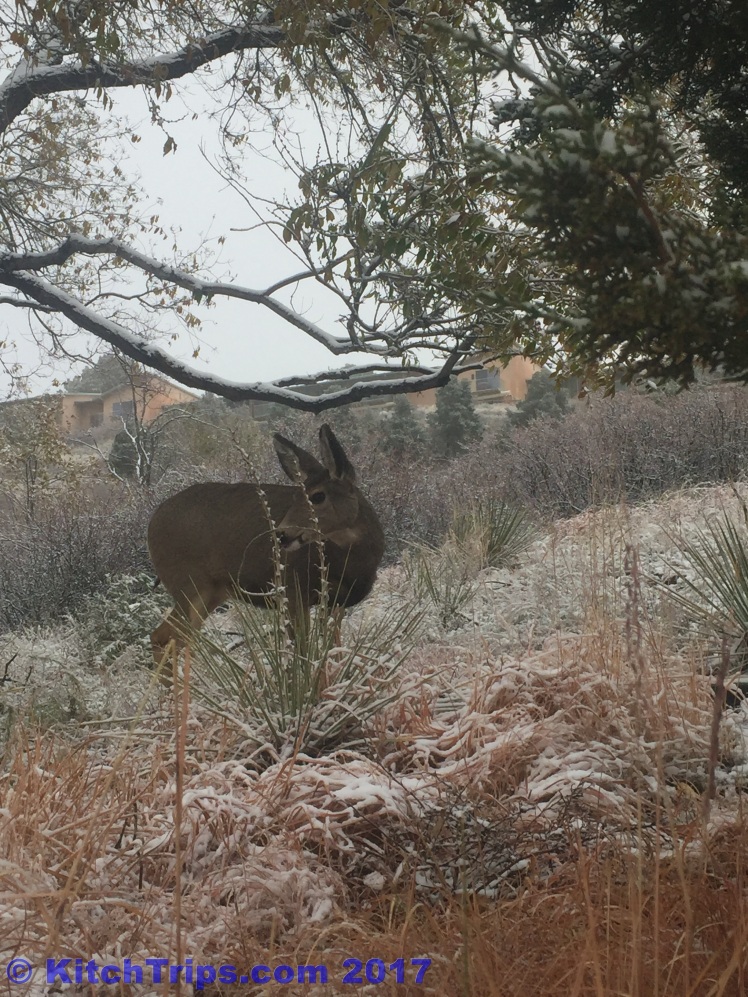 Unfortunately, and despite encouraging forecasts, a heavy bank of fog had settled over Colorado Springs, and it hadn’t lifted any by the time we’d had breakfast. We headed to the Pikes Peak Toll Road, and burst out of the cloud and into bright, unending sunshine a few miles before the road properly began. There, where we paid our admission fee, we got the bad news that the overnight storm had delayed the highway’s opening. They were still clearing snow and waiting for ice to melt before the entire nineteen-mile road could be opened, and the lady at the gate suggested we visit other attractions in the morning, and call back for a status update around lunchtime. 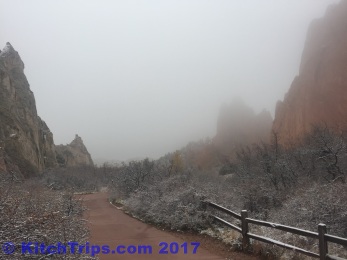 We did as suggested, heading to the Garden of the Gods. Unfortunately, that meant plunging back down into the fog, which meant that we saw the amazing sandstone formations in somewhat gloomy conditions. Not that it mattered. They were still special, the clouds and lingering snow added a new layer of texture. We walked the mile-long loop through what’s called the Central Garden, where many of the park’s most spectacular formations are located, then stopped at the well-named Balancing Rock on our way out. 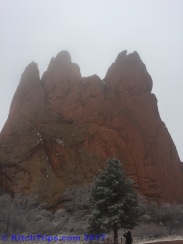 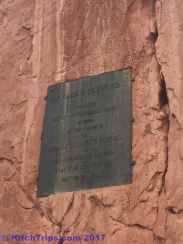 Nearby is the historic town of Manitou Springs. Imagine your Hollywood-typical mountain village and you get the idea. The main street is crammed with restaurants, bars, souvenir ships and candy stores: a very beautiful place that reminded me a lot of Lake Placid in upstate New York, where we’ll be in a week or so. It was close to midday when we arrived there, so we found a very nice bakery for lunch. The food was fantastic, and we had a table by the window, perfect for people-watching. 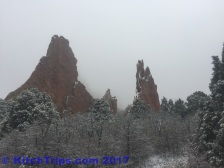 After we finished lunch, I called the Pikes Peak Toll Road and got good news: the road was open to the top. Once again, we burst out of the fog into blue skies and sunshine, paid our $50 entry fee and commenced the nineteen-mile journey to the top. 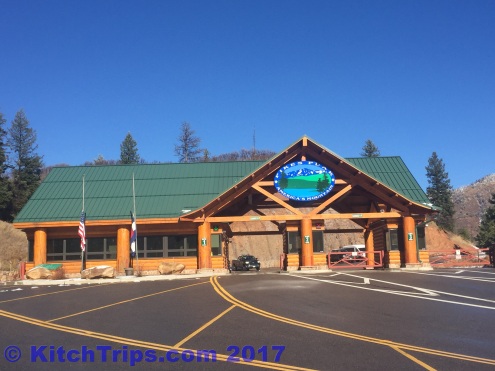 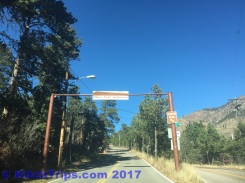 Seven years ago, I reached the summit by taking the famous Pikes Peak Railway, but with trains shut down for the winter, but the road is far more spectacular. It features 162 turns, some of them very sharp and steep, and stunning views everywhere you look. It’s quite a road, and one that is used as racetrack once a year, for the Pikes Peak International Hill Climb. Frenchman Romain Dumas covered the 156-turn 19.99km distance in 9:05:672 in a French Norma M20 RD. Insane! 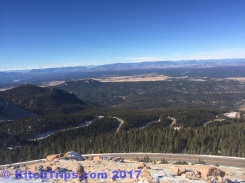 The temperature was about 24F/-4C at the summit, but the bright sunshine and no wind worth mentioning made it feel much warmer. I can’t even tell you how amazing it feels to stand at 14,115 feet above sea level and look down on the Great Plains. It’s no wonder that Katherine Lee Bates wrote the lyrics to the famous patriotic song ‘America the Beautiful’ at the summit. It’s simply that sort of inspiring place. 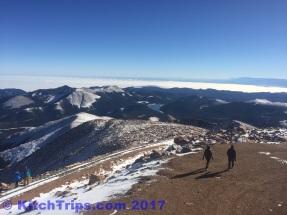 Colorado Springs, directly below us, was completely blanketed by cloud – an amazing thing in of itself – but we could see further afield. Visibility was no problem whatsoever! I took some pretty decent photos, but I think the Pikes Peak summit is one of those places you need to experience for yourself. And I thoroughly recommend you do just that. 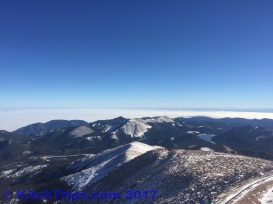 (If you were wondering, some of us felt a little dizziness at the top of the mountain, but that’s to be expected due to the high altitude.) 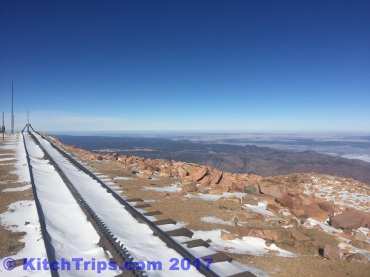 We had grand plans of going back through the Garden of the Gods on the way back to our hotel room, but the weather still didn’t cooperate: cloud, cloud and more cloud. Possibly some fog as well.

Olive Garden – an Italian chain – for dinner tonight. I rediscovered this place in August, when I was in the Midwest for a wedding. Hadn’t eaten it for probably eight years before that. Despite the chain nature, it’s very good and very filling food. Their breadsticks are to die for, and I enjoyed a nice big plate of spaghetti meatballs. A great end to a great day.

Tomorrow: driving back to Denver to take a flight east to Washington, D.C.