White knuckles on a hammer
Out swingin’ in the sun, I’ve been there
On a tractor in the summer
Sweat rollin’ down the back of that shirt
You work your a– off for a dollar
Puttin’ new wrinkles on a blue collar
Hoe-in the row y’all
Till the weekend then we really start kickin’ up dirt

The last day of October – which is Halloween here in America (and up in Canada) – brought our first real taste of cold weather.

I woke up before sunrise, when the temperature was below five degrees, and walked down to Degnan’s Deli to buy lunch supplies. Clearly, things happen in Yosemite at the pointy end of the day, because there was a queue when the doors opened at 7:00am, mostly people with big packs, heading out on serious day walks, or perhaps overnight trips, taking advantage of the conditions as they are. The good weather is meant to continue here until the weekend.

After breakfast we drove out to the Tioga Pass Road towards Tuolumne Meadows. Like Glacier Point, the Tioga Pass Road is very high, and is generally closed by this time of the year, but thanks to the warm weather, it’s open all the way through to the Inyo State Forest, somewhere around fifty miles from Yosemite Valley – and it is an incredibly scenic drive.

First stop was the majestic Tenaya Lake. You drive past Olmsted Point, and the lake appears, reaching right back to the high rock formations that are just as impressive here as back in Yosemite Valley. Needless to say, the eight degree temperatures – it’s said to be about ten degrees cooler on the Tioga Pass Road than it is back in the valley – had us all quickly reaching for whatever extra layers we’d packed. 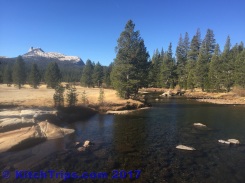 Our next stop was Tuolumne Meadows, and the temperature was even colder. Don’t let the blue skies and sunshine fool you: there was a wind that came up every now and again, and it was a chilly one. I can only imagine how brutal winters are on this flat meadow. When the wind dropped, it was perfect in the sunshine, and the views, predominantly of Lembert Dome, were spectacular. We walked a mile from the car park to Soda Springs and a memorial lodge before moving on.

Little did we know at the time, but the edge of the Yosemite National Park wasn’t far away, and soon we were driving through the Inyo State Forest. From just past the park’s border, the road drops into Lee Vining Canyon, a stretch of road that’s fourteen miles long, and descends through a series of harrowing switchbacks with epic views down into the canyon. The road literally sits right on the edge of the precipice in some places, and when you look out the window from the passenger’s side, you’re just about looking straight down. Amazing! (Unless you’re scared of heights, then it’s probably all sorts of terrible).

Although we had lunch with us, we all felt like something warm, and when a diner attached to a Mobil service station appeared just beyond Lee Vining Canyon (but before the small town of the same name) we decided to stop and eat. I had a giant and delicious bowl of spaghetti bolognaise, followed by some equally-delicious carrot cake, and left feeling very satisfied.

On the way back to Yosemite Valley, we stopped at Olmsted Point, where you get sweeping views of Lake Tenaya in one direction – little more than a narrow strip of blue at the foot of the distant mountains – and the back side of Half Dome in the other. You can scramble around on the rocks with no worries at all, and there’s no real set trails across them, so you can choose your own route. Lots of fun! Olmsted is also where the walking trail that heads into Yosemite Valley begins. I could have walked around there for hours.

We had an early dinner tonight, then headed to the bar for a drink and to watch the end of Game Six of the World Series. Dad had his first Bud Light Lime, an underrated beer, and the Dodgers avoided elimination and set up a winner-takes-all Game Seven tomorrow in Los Angeles. This series has had so much drama, and I’m definitely planning to be near a TV when the first pitch is thrown out at 5:10pm tomorrow. 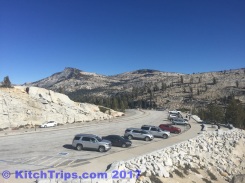 Back in the room now. It’s sad that our time in Yosemite is coming to an end, but we’ve certainly seen the best of what this amazing place has to offer, and there’s still more to see tomorrow on our way out to Bakersfield, California – an overnight stop on the way to Las Vegas, Nevada.