What a week it’s been! Honestly, it’s hard to believe that we’ve only been here since last Saturday. It feels much longer than that (in the best way!) and we’ve covered a lot of territory from Los Angeles, where we wearily disembarked last Saturday at just after 6:30am. We haven’t left California yet, which just goes to show how incredibly large and diverse the state is.

From the surf coast, we’ve travelled inland in the Sierra Nevada Mountains to Yosemite National Park. This is my fifth trip to the park – 2006, 2008, 2010 and most recently in 2013 – and it’s one of those places where, no matter whether you’ve visited a thousand times or for the first time, the place is astounding and amazing and majestic…and a dozen other adjectives. Fill in the blanks.

We left our AirBNB rental in Oakland and drove just over four hours to Yosemite, gradually climbing higher, away from the coast and into the mountains. The roads were windy and spectacular, through national forests, past big reservoirs and eventually into Yosemite National Park itself, where the fall foliage has already started taking affect. The deep yellows and reds and browns add another layer of beauty to this place. 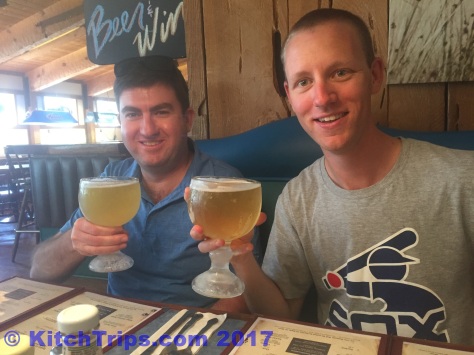 For lunch, we stopped at a small town called Buck Meadows, basically in the middle of nowhere, about 30 miles outside of Yosemite. We ate at a quaint country diner and I had a great bowl of chilli (sort of a cross between a stew and chilli con carne) alongside the biggest and heaviest Bud Light I’ve ever drunk. It was a goblet, frozen cold – and it tasted amazing!

Check-in at our accommodation, the Yosemite Valley Lodge, wasn’t until 4pm and we arrived shortly before 3pm, so we drove out to two spectacular viewpoints. First stop: Tunnel View where you can look down the valley with El Capitan on your left, Bridalveil Falls on the right and, further down the valley, the imposing Half Dome. Yosemite Village is down there somewhere in the distance, but it’s built in a way that it doesn’t impact on the natural beauty. In a way, the view is the same now as it might have been when the first explorers came through. Today, Tunnel View lookout was a madhouse, cars and busses everywhere, so many people taking full advantage of the very mild weather. 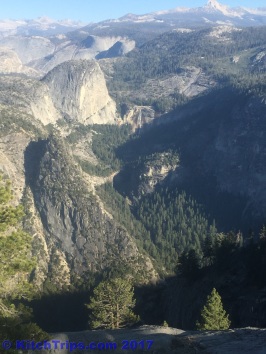 It should be colder at this time of the year, and snow in the high Sierra often means the road to Glacier Point, a good twenty miles up from Tunnel View, is closed, but with the California heatwave that we’ve lived through these last few days, there’s no snow on the horizon, nor has there been any this season, so the Glacier Point road was open. 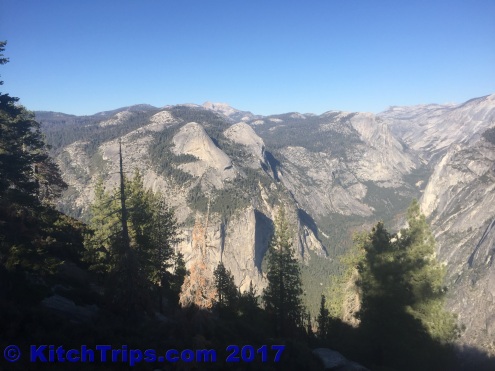 Never having visited this early in fall, I thought that Tunnel View was the best vantage point in Yosemite, but it has absolutely nothing on Glacier Point. You’re basically standing on top of the valley, looking across to Half Dome – it feels like you can reach out and touch – and here, unlike Tunnel View, you can actually see Yosemite Village, five thousand feet or more down on the valley floor. It’s an astounding view, and no photo I could take is ever going to do it justice. Another one for the Bucket List: Glacier Point needs to be seen to be believed. We had an amazing afternoon for it, despite a couple of small fires burning in the vicinity.

We headed back to Yosemite Valley and checked into our rooms for the next four nights. We have very comfortable hotel-type rooms with tiny verandas out the front, and we’re right next to Yosemite Falls. Close enough, in fact, that a number of deer have wandered past this afternoon. It’s amazing to be in a place where animals are so close.

Mountain Room for dinner tonight, an upscale-casual restaurant (according to the guide book here) where I had amazing roast chicken with polenta and mixed vegetables in a really nice setting. USC game on TV when I got back to the room – nice to see them playing competent football again! – and a good night’s sleep on tap. 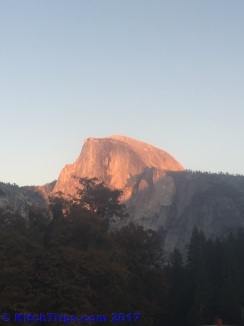