I left my heart in San Francisco
High on a hill, it calls to me
To be where little cable cars climb halfway to the stars
The morning fog may chill the air, I don’t care

My love waits there in San Francisco
Above the blue and windy sea
When I come home to you, San Francisco
Your golden sun will shine for me

Not surprisingly after yesterday’s big day of exercise, we all slept very well through a somewhat-cooler night than the one before. All the weather reports are calling for a return to normal fall temperatures in the next few days, but we should have more immediate relief from this strange Indian summer when we get to Yosemite tomorrow.

After breakfast, we drove to Muir Woods National Monument, on Mt Tamalpais in the picturesque Marin County on the other side of the bay. For the uninitiated, it’s a grove of some of the oldest and tallest trees to be found, not just in America but anywhere in the world, including the iconic Californian sequoias. They grow to over 150m tall, and are truly a sight to behold.

It’s amazing to think that these majestic trees have been around for literally thousands of years old. In fact, one hundred and fifty million years ago, there were sequoia trees growing all over the country, but they can now only be found in on the coast from Monterey, California in the south to Oregon in the north.

The best thing about Muir Woods? The hiking trails. We left the valley and took the ‘Canopy View Trail’ which eventually deposited us at the top of the hill. From there, we walked along the edge of the Panoramic Highway for a few minutes before dropping back down in amongst the trees, following an old road in the shade of the trees to a place called Camp Alice Eastwood. It was so beautiful strolling along through the dappled sunshine. At the camp, we joined the Redwood Trail that took us back to the visitor’s centre. About five miles all up, and thorough enjoyable.

We ate lunch at Muir Woods, then drove across the Golden Gate Bridge and down to Fisherman’s Wharf. There, joining dozens of other tourists, we took one of the city’s famous cable cars (what we would call a tram in Australia) and rode to downtown. It’s a bumpy, steep ride as the slow-moving cable cars, with a gripman controlling it from the middle of the car, navigate the very hilly city streets. Mum likened it to the world’s longest roller-coaster. There’s certainly plenty of ups and downs! 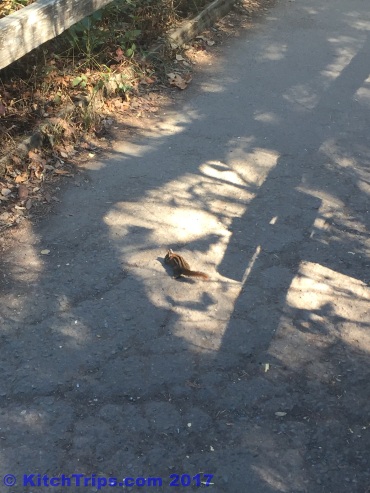 The cable car dropped us off at Union Square, right in the heart of downtown San Francisco. Trust me, if you love shopping, Union Square is your spot. There’s every store you can imagine – Macy’s, Bloomingdale’s, Nordstrom, Saks Fifth Avenue, Disney Store – and probably a few more than that. I bought a jacket to replace the parka that I left at home. Still can’t believe I did that! (Not that I’ve needed it so far, mind you!).

On the return journey to Fisherman’s Wharf, I got to ride shotgun on the running board, which is a very interesting experience, and a lot of fun. You feel the need to really compress your body and hug tight against the pole you hold onto when cable cars pass the other way. Nor is there much gap between you and parked cars. The views of the San Francisco Bay were tremendous on such a beautiful, cooler afternoon.

Tonight is our last night in our AirBNB rental in Oakland, which has been a success, aside from a few minor things. We had a chicken satay for dinner, watched some more of the World Series (Houston won at home to take a 2-1 lead in the best-of-seven series) and a couple of Chicago PD episodes before bed.