Honestly, it’s crazy to sit back and realise that we’ve only been here a little more than forty-eight hours. Already, with what we’ve done and seen, it feels like we’ve been on vacation for a week or more. 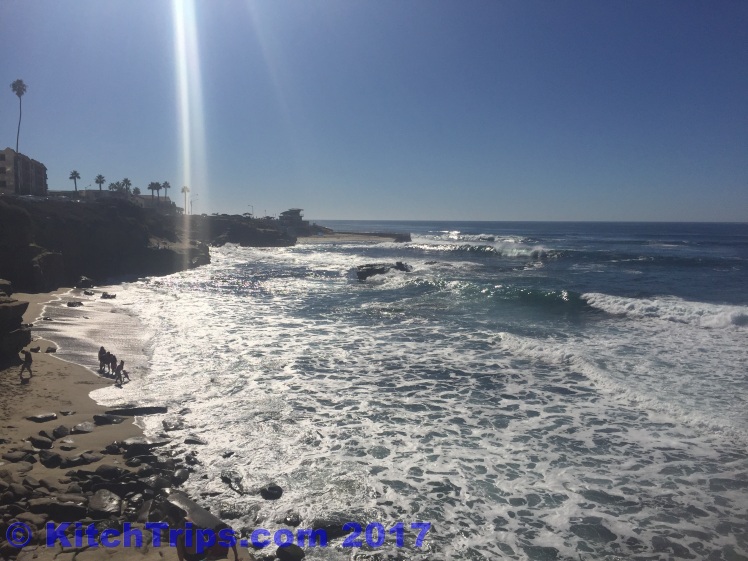 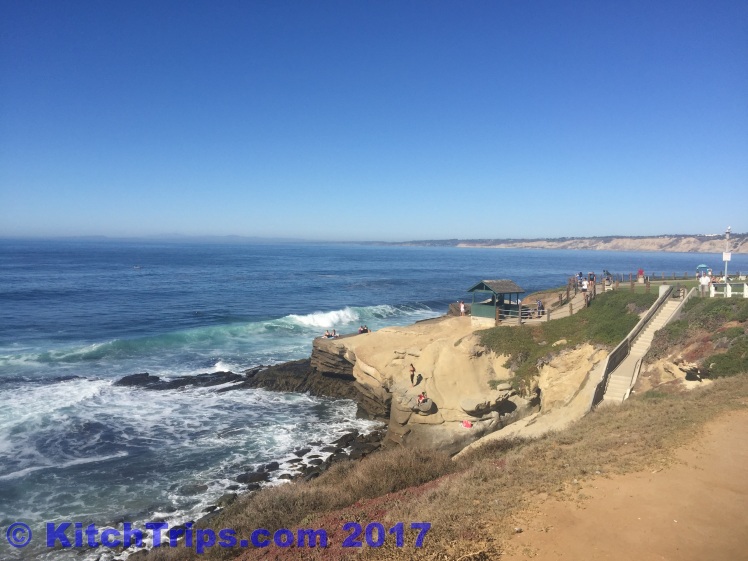 Today was a hot one in San Diego. Hot enough that schools in the area where my mate Kevin teaches (Coronado) were closed for what’s called a heat day. Basically, the superintendent deems that it’s too hot a day for students, so they just don’t go to class. How hot exactly? I got a text from Kevin in the afternoon and it apparently hit 101 degrees in his neck of the woods. That’s 38.3 degrees Celsius. And tomorrow’s supposed to be hotter, which isn’t good news for the wildfires burning in and around Marine Corps Base Camp Pendleton up the coast.

Thankfully, where we were today was not too hot. We drove out to Torrey Pines State Reserve, about twenty-five minutes north of San Diego on the spectacular coastline and hiked down to one of the beaches for a couple of hours. The trail is long, with many switchbacks, getting deeper and deeper into the rugged, eroded canyons before you’re on the edge of that classic Californian surf coast. 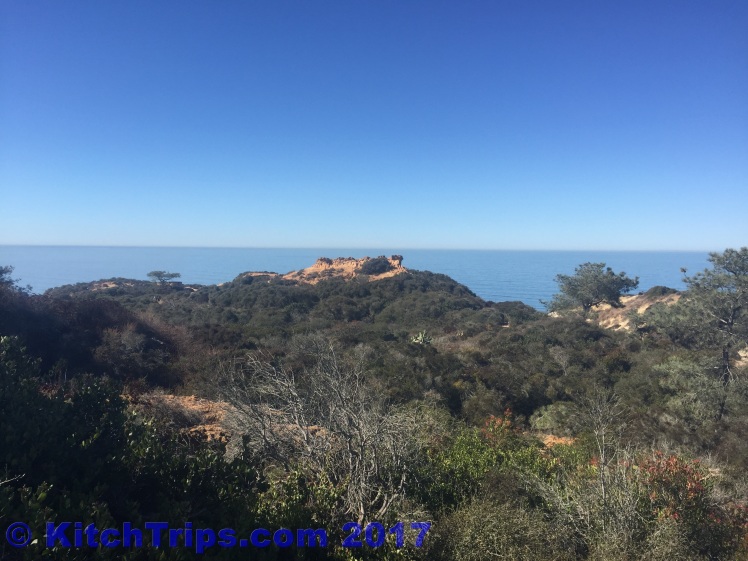 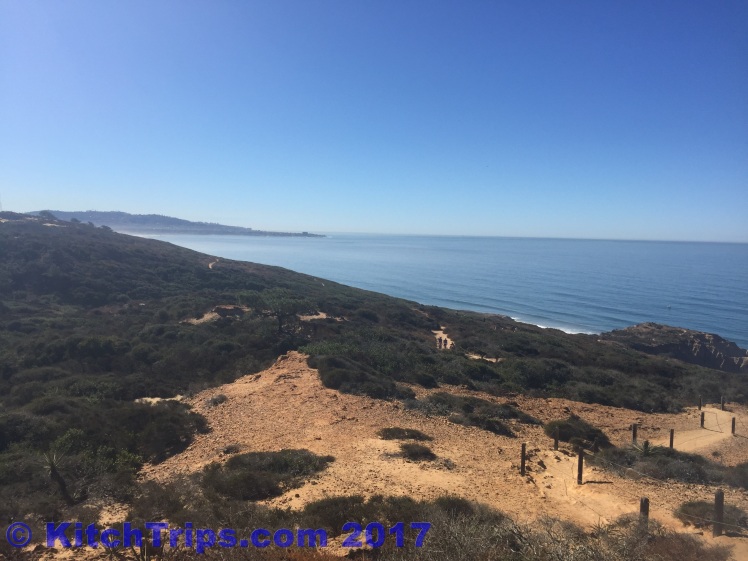 No matter which way you look – north or south – there’s a spectacular vista. It’s not hard to see why so many people are drawn to this city, with it’s remarkably laidback style and lovely countryside. You can eat well and still be healthy in San Diego, with many areas like Torrey Pines well suited to physical exercise: running, walking, cycling, whatever. 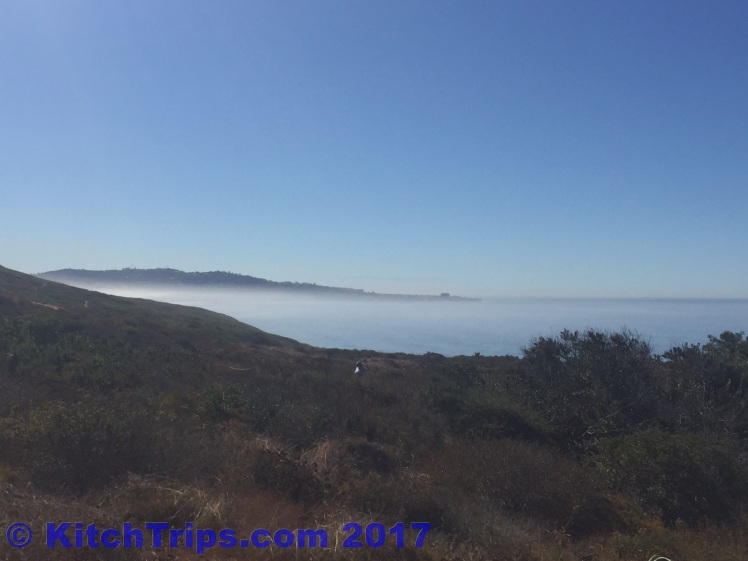 The sound of waves breaking against the Californian shoreline was somewhat overpowered at times by the sound of fighter jet engines. Fighter jets of the 3rd Marine Air Wing, staging from Marine Air Corps Station Miramar were streaking through the blue sky over our heads with regularity, heading out to sea on what must be training runs or something similar. It was incredible to see these amazing pieces of technology doing their thing overhead. I’d love to take a spin in one of those bad boys. We saw helicopters, too, including a pair that buzzed pretty close by me when we were down on the beach. 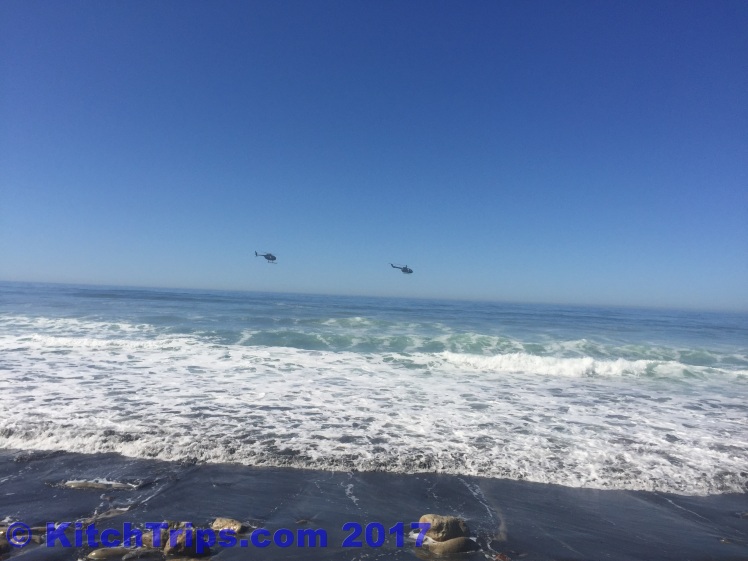 After leaving Torrey Pines, we headed around to La Jolla (pronounced, as we found out, La Hoya) where we ate lunch in a pleasant café and walked down to the waterfront. La Jolla is home to a colony of seals and sea lions, and they’re happy enough lazing about in the sun on the rocks. Some were fast asleep and others were definitely up and about, arguing with each other over what I assume was some territorial dispute. 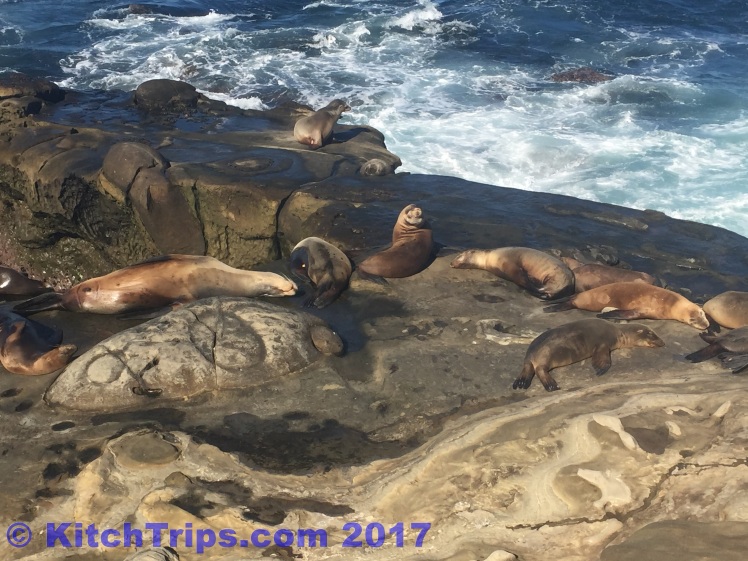 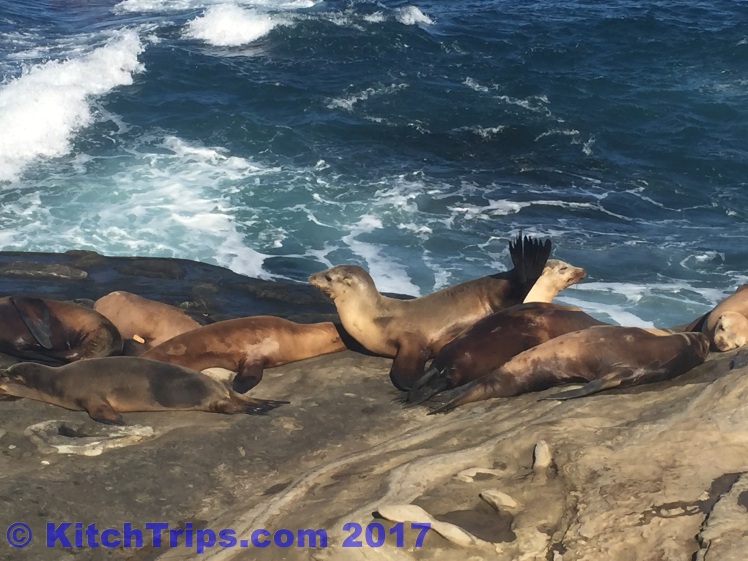 There are signs all over saying not to try and pat them because they have been known to attack. The sleeping ones look very placid, but just when you think it might be okay to reach out and stroke their upturned bellies, one of the other ones opens it’s mouth, and you see the sharp teeth they’ve got, and rethink the idea. Oh, and they all stink – like, really. But they’re amazing to look at.

We headed back to the hotel mid-afternoon. We’re at the Days Inn on the aptly-named Hotel Circle, and it’s a great place, close to everything in what’s a fairly spread-out city.

Dad and I walked down to the local liquor store to buy beer and wine. Mum is the proud new owner of a mega-sized bottle of California merlot that cost just $10.99. I’m posting this blog in the evening, a few hours after purchase, so there’s a chance it’s already gone. Or at least well on the way to being gone! (Sorry, mum!)

Applebee’s for dinner tonight, an unpretentious and moderately-priced diner/grill type of place with plenty of screens showing all the sport that you can handle, including Monday night football. It’s one of my favourite places to eat. The mozzarella cheese sticks are so close to heaven it ain’t even funny. The rest of the food was very good, too. Mum and dad both enjoyed their first Applebee’s experience.

Early night tonight. Sad to be leaving San Diego tomorrow, but we’re headed up the coast towards northern California.