Made in America, nineteen fifty nine
Born down by the factories, ‘cross the Jersey City line
Raised on radio, just a jukebox kid
I was alright

Just a small town homeboy, with big dreams
Following his conscience, in a world full of extremes
Fresh outta high school, only seventeen
I was alright

Friday 27 May
I had a pretty good sleep until about 3:30am when I woke up hot like you wouldn’t believe. The air-conditioning, set at around 72, had been on all night, and it dried me out like…well, like a very dry person. It took lowering the temperature to flood the room with cold air and a good hour or more of uncomfortable tossing and turning for me to get back to sleep. I did, eventually, and woke up to the alarm at 8:00am. That was nine hours, but it didn’t feel quite that long.

Anyway, I was energised. I mean, this was my first chance to lay eyes on the Indianapolis Motor Speedway. First things first, though – we went for a nice walk down to the JW Marriott hotel, whose exterior is covered with a 100th Indy 500 livery. Pretty amazing to look at. We came back via Starbucks for breakfast, which, for me, included a spicy chorizo and egg roll. Really good. The black coffee woke me up, too.

Then, it was off to the Speedway. Carb Day is important, with teams running race trim, and gives us a good indication as to who has speed in the configuration that’s all-important. It’s one thing to go fast in qualifying trim but another thing entirely to be fast in race trim. After the drama of last weekend’s pole qualifying, today was the day to embed setups as everyone – drivers, crews, officials, media types and fans – look ahead to race day.

We ran into some traffic a few miles out from the track, and got lucky to find a parking spot in the middle of the aptly-named Speedway, Indiana (outside Speedway High School) which was only about a ten minute walk to the main entrance of the track. There were people everywhere, and it was later announced that this year’s Carb Day was one of the biggest in recent memory. The amazing weather helped – it was warm and sunny, about thirty degrees Celsius.

If you’ve never set foot inside the Indianapolis Motor Speedway, allow me to set the scene:

Let me tell you this: it’s a mammoth facility, quite unlike any other venue I’ve ever been to, including NASCAR’s equivalent, Daytona. Indy absolute dwarfs Daytona. Yes, the tracks are the same size, but Daytona seems puny in comparison, and actually holds less than half of Indianapolis’ capacity.

You don’t understand how big Indy is until you walk in. No TV vision does it justice. To stand around the start finish line, where the famous yard of bricks crosses the smooth asphalt surface, and look down towards turn one as IndyCars buzz by at well over 200mph, you realise the enormity of the place. From there, the cars seem to be driving into a wall of grandstand, rising high to the sky, two and three decks high, and right at the last minute turn hard left and head into the short chute, and turn two.

Unlike other ovals, you can’t see all of Indianapolis, no matter where you sit. Grandstands on both sides of the track (and the famous pagoda at the start/finish line) on the front straight make it impossible. I can’t even begin to imagine how it would feel on the first lap of the race, to see that mass of people in grandstands reaching for the sky.

Being trackside after so many years being an IndyCar fan is exhilarating. I felt like a kid on Christmas morning today, walking into the speedway. Grandstands sparsely populated on Carb Day will be jam-packed on Sunday. There are no grandstand seats left, and even general admission seating is going quickly. Although the track doesn’t post attendance numbers, there’ll be around 400,000 people in attendance on Sunday, making the Indianapolis 500 Mile Race the largest single-day sporting event in the world.

I’ve been an IndyCar racing fan since high school. I remember clapping eyes on the 1998 race at Surfers Paradise in Queensland, back when the CART World Series was the big dog in American motorsports, and I was instantly hooked. Those sweet Honda and Toyota and Ford turbo engines, stacks of horsepower, Reynard or Lola chassis that looked unbelievably beautiful, and the drivers – Franchitti, Tracy, Vasser and Zanardi – who raced so quickly and competitively. Since that day, I’ve been hooked.

I remember back to the days before Channel Ten, when the only broadcast of the Indianapolis 500 was almost twenty-four hours’ delayed, late night on Channel Nine on a Monday night, with Darrell Eastlake and Alan Jones hosting. Then, we had live coverage on Channel Ten, then Ten and ESPN and now FOX Sports have taken over.

So much as changed since 1998. There used to be no Australians in the field, and now, for this 100th Indianapolis 500, there are two. One of them, Toowoomba’s Will Power drives for Roger Penske, the winningest team owner – he has sixteen race victories. The other, Matt Brabham, is the grandson of Sir Jack Brabham.

Since I left high school and started work, I’ve always taken the last Monday in May off work so I could get up before 2:00am to watch the 500 live. Actually going to Indianapolis has been on my Bucket List for a long time. I’ve seen some big American sporting events in my life: the 2006 Daytona 500 and 2009 Rose Bowl Game chief amongst them, but never Indy. Until now. And, after one mesmerising day, I wish I’d gotten here sooner.

There’s an energy to Indy that’s hard to explain. You walk around the place and the ghosts of 500’s past feel like they’re following. I saw parts of the track up close today that I’ve seen on TV for years and years, and they spark my own memories of early morning wake-ups and it’s quite surreal to actually be on the ground where it all happened. 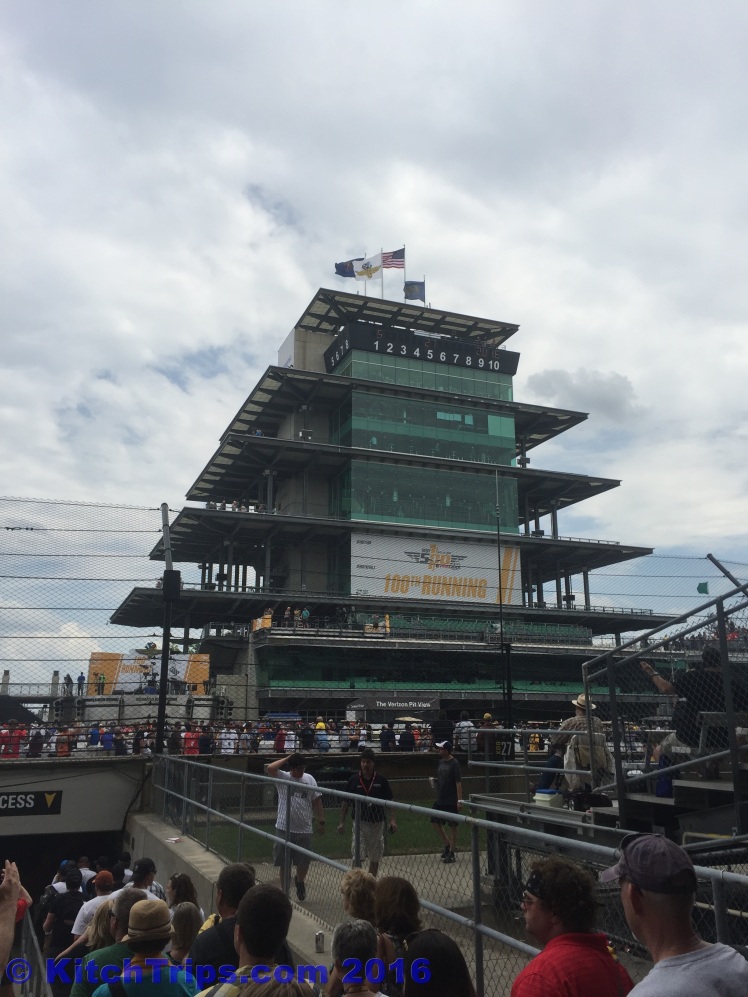 Cars absolutely fly around this place. We watched final practice from at the entrance to turn one, and settled in for the 100-mile Indy Lights Freedom 100 race – and what an incredible race it was. Dean Stoneman won it by just two thousandths of a second. It was a finish you had to see to believe. The gap between the two cars was almost non-existent. Maybe an inch in it. If that. You felt so sorry for Jones. That’s a horrible way to lose a race. Especially at Indy.

The Pit Stop competition gives all the crews a huge chance to shine – they’re an important part of any race-winning effort, and a pit stop, good or bad, can sometimes be the difference between victory or defeat in the Indianapolis 500 – and to earn bragging rights, too. The way these guys slave so efficiently over their race cars is amazing. These guys are the unsung heroes of racing, and it was great to see them front and centre this afternoon.

I took the opportunity to buy a Graham Rahal shirt – my favourite driver – and a few other souvenirs in the infield of the speedway, which is so big it includes a road course circuit and two holes of the Brickyard Crossing golf course. There were people everywhere, but it won’t be anything compared to Sunday, so today was definitely the day to go shopping. I’m looking forward to getting Rahal to sign my program at the autograph session tomorrow.

Tonight, we went across the road to the Pan American Plaza where a local Indianapolis radio station was doing their annual Carb Night Burger Bash. Basically, it was a live broadcast featuring many drivers, media types and IndyCar Series officials talking about the race, the sport and the history. Some of the recollections gave me goossebumps. It’s hard not to be completely excited now. The crowd of probably 4000 or more were all hard-core IndyCar fans, and the vibe on such a gorgeous Indianapolis night was great. A really awesome way to end a great day!

And, really, things are only just starting to ramp up – looking forward to a good night’s sleep, hopefully without air-conditioning dramas.

There’s no on-track activity tomorrow on Legends Day, but we’re heading to the Driver’s Meeting at IMS in the morning, then the Indianapolis 500 Parade through downtown Indianapolis in the early afternoon, and back to the Speedway for Blake Shelton’s concert in the evening.