New York City, subway on the run,
San Diego surfers, soaking in the sun
That’s my hometown
America’s my hometown

The days we have left in America are winding down now, and as is always the case when I’m in Chicago, I’m not looking forward to going home. Thankfully, we’re going to go home after having an amazing week in this city, so that’s something.

Overcast skies today, and rain was forecast for later in the afternoon. The precipitation didn’t eventuate, but it was one of those days that just didn’t reach any great heights. We had to do some shopping anyway, so we headed to a nearby mall and stopped in at a couple of places recommended to us for Christmas decorations. Mum’s come away with some nice stuff to freshen up the tree, and I saw plenty of stuff that I wish I could take home. Alas, my suitcase is already full, I’ve busted out the second bag, and I don’t trust the baggage handlers nearly enough.

We had a quiet afternoon back at the house, which allowed me to get a head-start on packing my suitcase. It’s probably one of my better packing jobs, though it’s early days, and I still have more stuff to go on. My usual strategy is to throw everything in as best I can, make sure it fits, and get to the airport early enough that the TSA will do a bag search and expertly re-pack everything. It works more often than not!

The gloomy afternoon had become night by the time we left for Wheaton around 4:30pm and we were treated to a display of how bad Chicago traffic can be. Which put us behind schedule in getting to Matt and Jaimie’s where the presents I’d brought over in the summer – the week-long visit for the Donahue wedding, when I had very little in my suitcase – were unwrapped by their kids. They were very well-received, which was fantastic. Miles’ water-propelled rocket is going to be fun for the summer. Can’t wait to give it a spin when I come back!

After a drink at Matt and Jaimie’s, we drove around to the Weller’s house for dinner. Scott (who went to high school with Matt back in the day) is one of the funniest people I know here, and I always say that he could easily fit right in back in Australia. And Kristina is a lot of fun, and definitely does not take any of my crap! Scott and I had a bet on a football game back about a month, which I won, so I was enjoying cold 312 (a local Chicago brew – the telephone area code here is 312) all night. Nothing tastes better than free, cold beer! 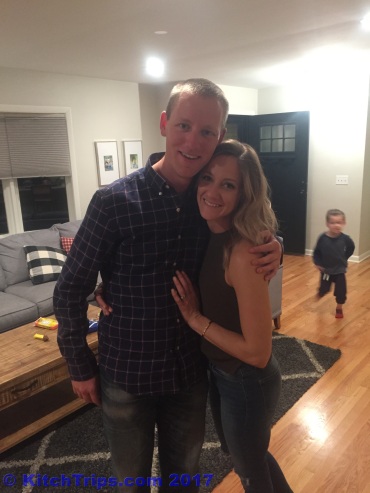 Scott’s parents Jerry and Donna (AKA Babu and Tutu) came over as well. I’ve met them a couple times over the years. They’re great people and it was good to see them again. Throw in Scott and Kristina’s kids, Cam and Max (who’re a lot of fun), plus all us adults and Maggie the dog, and it was a really fun evening. Kristina – the food was beyond fantastic. Just when I thought I couldn’t eat any more after chicken and spaghetti, out came some legendary cheesecake, and after that I was definitely full. Thank you so much, Weller clan. We had a fantastic night.

Ugh, I hate knowing there’s only two more days left before we start the long journey home to Australia on Friday. At times it’s felt like we’ve been here for eons – in a good way – but this last week or so since Thanksgiving has absolutely flown by. On one hand, looking forward to getting home, but not looking forward to leaving on the other. So, I’m already planning a return visit. Nothing like getting over the post-vacation blues by planning another!

Weather’s going to be fantastic tomorrow!