The brave men, living and dead, who struggled here, have consecrated it, far above our poor power to add or detract. The world will little note, nor long remember what we say here, but it can never forget what they did here. It is for us the living, rather, to be dedicated here to the unfinished work which they who fought here have thus far so nobly advanced.

It is rather for us to be here dedicated to the great task remaining before us-that from these honored dead we take increased devotion to that cause for which they gave the last full measure of devotion-that we here highly resolve that these dead shall not have died in vain-that this nation, under God, shall have a new birth of freedom-and that government of the people, by the people, for the people shall not perish from the earth.

What Australians call Remembrance Day is known here in the United States as Veterans Day, and to escape the goings-on in Washington D.C., we took an Uber across to Reagan-National Airport, about 6km away across the Potomac River in Virginia, in temperatures just one degree off record lows for November in the District, and hired a car. 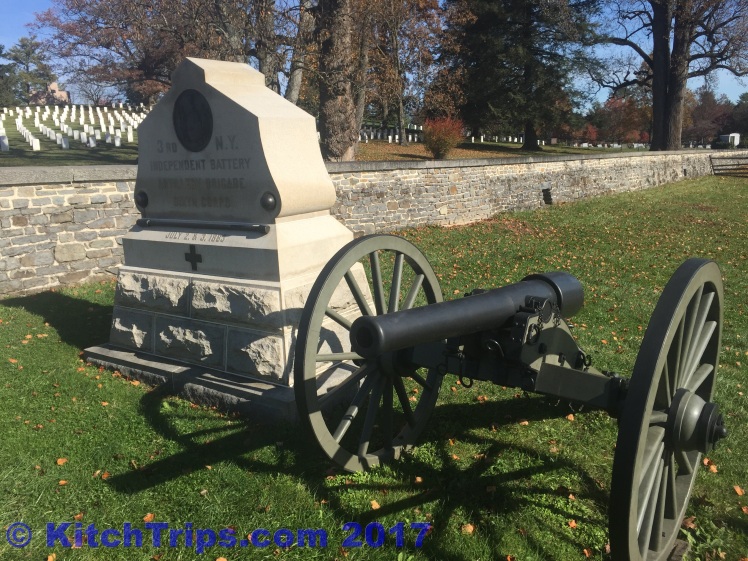 I should say, tried to. After some administrative issues at the desk, which were proceeded by us being in a state of general confusion – we got on a shuttle bus to journey to Terminal A, not knowing that Terminal A was where we’d gotten on; no wonder the driver gave us such a strange look – we managed to get as far as the gate at Dollar rent-a-car, where, after some consternation amongst the employees of that company, it was decided that we needed a new car. 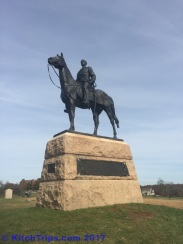 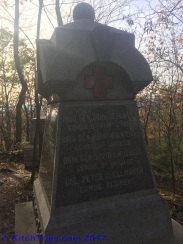 The forced switch was from a Nissan Rogue to a Dodge Journey, and we were underway. From Reagan, we journeyed through Maryland and into Pennsylvania, to a little town that, prior to July of 1863, was barely-known to Pennsylvanians, let alone anyone else from anywhere in the world.

Following the bloodily climactic events of July 1-3 1863, where the United States Army of the Potomac under George Gordon Meade clashed with the Confederate Army of Northern Virginia, with Robert E. Lee in command, Gettysburg is as well-known as any other battlefield upon which the American Civil War is fought.

The Battle of Gettysburg claimed between 46,000 and 51,000 casualties, and put an end to Lee’s plan to invade the northern states and drive on Washington. After three days of fighting, culminating in Pickett’s Charge, an advance by North Carolinians and Virginians across nearly a mile of open ground into the teeth of entrenched artillery and massed infantry, the Confederate army was in full retreat. Despite being repulsed in the end, the men who made the fateful charge very nearly broke Federal lines – American history was a matter of a few yards and a few minutes away from being completely changed.

In the years since the Civil War, the battlefield has been mostly restored to how it was on those three days in July 1863. Aside from a few structures like the Visitor’s Centre, and the network of roads that take you through the vast battlefield, you can stare up through the trees towards Little Round Top or across the open ground where Pickett’s Charge went in, and, in your mind’s eye, see artillery batteries firing, and infantry in blue or grey, struggling across the open fields or through the rocks in Devil’s Den, headed for Big Round Top.

We started our visit with a walking tour that took us to Cemetery Ridge, the centre of the Federal position, and learnt a lot – and I mean, A LOT – about artillery from our National Parks ranger-guide, who clearly loves his Civil War artillery, and loves to talk about it. We ended this tour at what is known as the High Water Mark of the Confederacy, where Pickett’s Charge was finally beaten back.

At the conclusion of the tour, we had a picnic lunch, in sunny conditions with the temperature a few notches above freezing, then enjoyed a bracing walk to the summit of Big Round Top. This was the extreme left of the Federal lines, the 20th Maine regiment, commanded by Joshua Lawrence Chamberlain, a teacher in Maine before the war. They were involved in a fierce fight on the second day of the battle as Lee tried to flank the Federal lines. It was another close-run event: a brave bayonet charge when out of ammunition by the 20th Maine was enough to drive the Confederate troops off the hill. Although, it could have gone differently.

Of course, we continued our tour of cafes across America, enjoying a caffeine hit at Christie’s Café in downtown Gettysburg. Then we visited a few more monuments – including the impressive Robert E. Lee/Virginia memorial – and climbed the Longstreet Tower (132 steps each way) for a bird’s eye view of the battlefield on our way back to D.C.

Gettysburg is a fascinating but sombre place to visit. You start thinking what a beautiful place it is, with mountains and fields, then realise that so many men were wounded or worse, men from the same country – even though they technically weren’t at the time – in those peaceful fields and up on those heights. It seems like such a horrible waste. As does war anywhere, really. 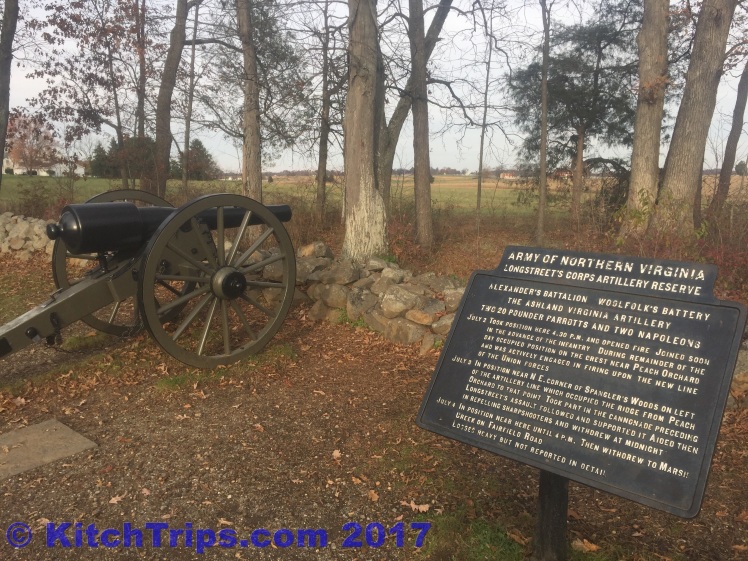 Although I’m a day late for Australia, I’m going to close by saying that I’m grateful for all who have sacrificed so much for our great country in every conflict Australian troops have been involved in, from the Boer War through current-day operations in the Middle East. Thank you.

Northbound tomorrow into the great state of New Jersey.