The thing about the Las Vegas area is that the natural wonders are often overshadowed by what’s on offer on the Strip. I mean, sure, people know that the west rim of the Grand Canyon – our destination tomorrow, incidentally – is only a couple of hours drive from downtown, but how many people know of the existence of Valley of Fire, for example?

If you want wilderness adventures, you can get them in spades around here. Case in point: we drove out of Vegas towards Arizona on Saturday morning, to the Lake Mead RV Village, where we joined a tour group headed to Black Canyon on the Colorado River. 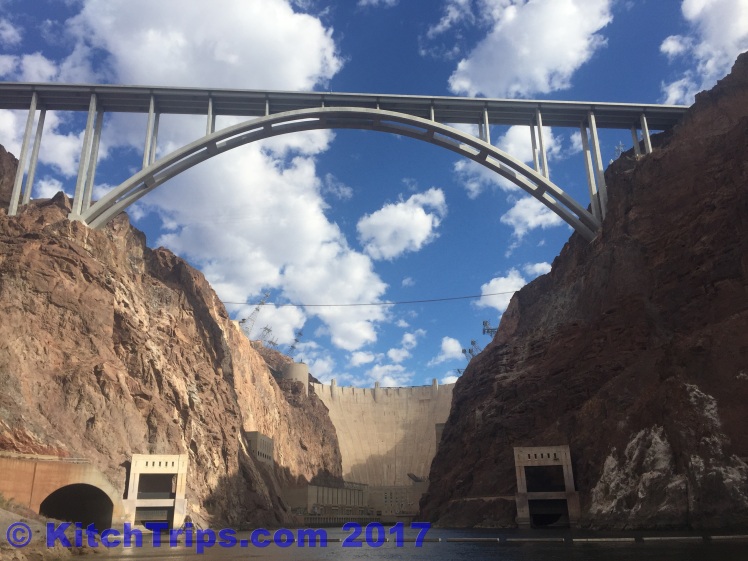 We were driven by bus to the bottom of Hoover Dam. I’m sure you’re aware of the significance of the dam: it brought about the creation of the largest man-made lake in the western hemisphere, Lake Mead, and also tamed the mighty Colorado River.

Sitting in front of the dam as you look at it from the Colorado River beneath, is the new bypass bridge, the Mike O’Callaghan-Pat Tillman Memorial Bridge, which was built to alleviate motorists having to cross the dam wall every time they headed into our out of the Las Vegas area. By all accounts, the bridge is a godsend.

It’s named for former Nevada governor Mike O’Callaghan (1971-1979) and Pat Tillman, a former NFL player who gave up his millions and enlisted in the United States Army following 9/11. He was sadly killed over there, but his memory remains alive and well in Arizona, where he starred for the University of Arizona is nearby Tempe, and also played pro football for the Cardinals in Phoenix.

Getting a good photo of the entire dam from above is hard, but from below, you get an amazing view of the sheer dam wall with the towering bridge in front. From the base of the dam, we boarded a motorised raft that took us thirteen miles down the river through Black Canyon to Willow Springs Beach.

The cruise is definitely not a white-water rafting trip. Rather, it’s a pleasant, meandering journey down the river, with a well-informed and very entertaining guide/pilot – Jeff was a lot of fun, even with his bad Aussie jokes – who talks about everything from the local animal and bird life, to Hoover Dam construction and other interesting pieces of information, history surrounding what was once the wild, wild west.

Due to the wind blow up the river, we got a fair bit of spray, but the four of us had the distinct advantage of sitting at the back of the craft. Those closer to the front weren’t so lucky. Some got very wet, but the weather was pleasant enough – sunshine, about 25 degrees – that the water wasn’t too unpleasant.

We docked at Willow Springs about 1:30pm and boarded the bus back to the Lake Mead RV Village, where our car was waiting. Back at the house, I spent the afternoon like a real American: watching college football – there were compelling games on six channels at the same time, a channel-surfer’s dream – and drinking cold Bud Light. A great end to a fun day!

Looking forward to closing out our time in Las Vegas with a trip out to the Grand Canyon tomorrow, before flying to Denver on Monday morning.